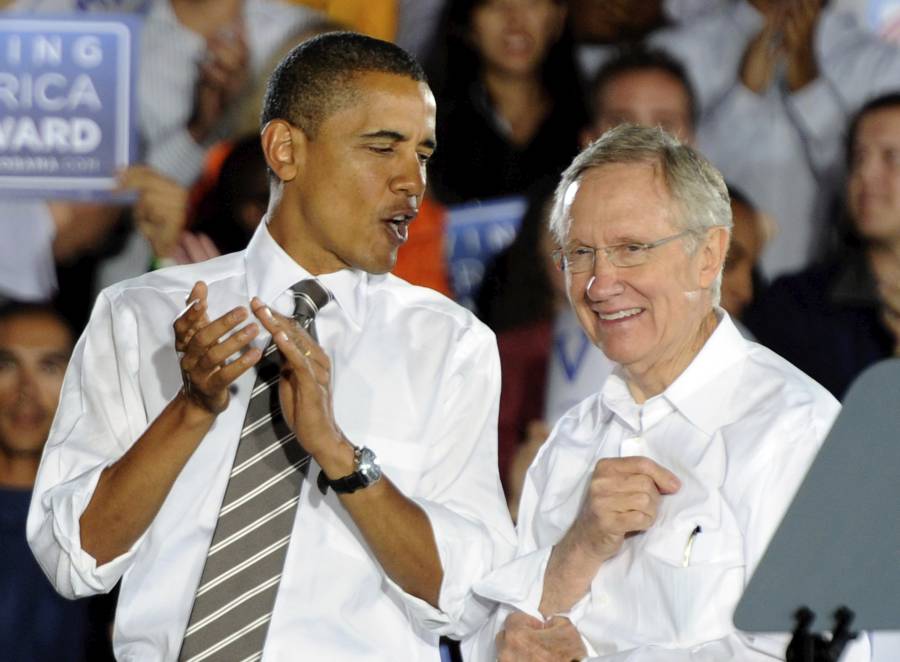 Obama and Reid at a campaign rally in Las Vegas in 2010. (Getty Images via The Stream)

When a bill has 534-to-1 approval in Congress and is still stalled, you can rest assured who the one is.

The Taxpayers Right-to-Know Act, sponsored by Oklahoma Republican Sen. James Lankford, has unanimous support of the House and every senator  save one, Harry Reid, according to a website called The Stream.

Lankford’s bill would require extensive accounting for every federal program with a budget of more than $1 million. The CBO estimates that implementing the bill would cost $82 million over the 2016-2020 period, but it could expose the waste of many billions in redundancy, waste fraud and abuse — as much as $200 billion a year by some estimates.

“This exposes the duplication so everybody can see it. Watchdog groups on the outside can see it, everybody in Congress can see exactly where we have duplicative programs, and how much is spent, and how they are evaluated. …” Lankford told The Stream. “It passed unanimously in the House, and it’s come to the Senate. And it’s currently [backed] 99-1 in the Senate. Harry Reid himself is holding it up, and trying to keep it from moving on to the Senate floor, and is trying to stall it for whatever reason, we don’t know.”

According to both The Stream and an editorial in today’s Las Vegas newspaper, Reid’s office did not respond to multiple requests for comment about the hold. The editorial concluded, “This taxpayer-friendly legislation deserves better than to fall victim to Senate politics.”

Though Lankford said he has visited with Reid about the bill, he had no rational explanation for why it is being blocked other than “having the Senate run as slow as possible and get the least amount done.”

Reid also blocked the bill in a previous session of Congress without explanation.

So, remember to thank Reid for looking out for you when you send that check to the IRS tomorrow.

65 comments on “Harry is single-handedly blocking a bill to expose waste, fraud and abuse”