How affordable is the Affordable Care Act? Not so much, and increasingly not so much, according to a helpful od-ed in today’s morning newspaper by Nathan Nascimento, director of state initiatives at Freedom Partners Chamber of Commerce.

Nascimento points out that both premiums and deductibles for the three metal plans under ObamaCare — gold, silver and brozne — are high and going higher.

“All three metal categories increased by an average of $268, or 14 percent, in Nevada this year,” he writes of the deductibles.”Silver plans — which with 40,000 enrollees are the most popular in the state — now have deductibles averaging $2,848, while bronze plan deductibles average $5,790.”

According to Freedom Partners website, specifically Nevadans this year will see bronze plan deductibles go up $408, silver plans $210 and gold plans $507 for an average of $268.

“While some may instinctively blame insurance companies for these rising costs — after all, they’re the ones mailing the bills — they’re losing money, too,” Nascimento points out. “UnitedHealth, one of the nation’s largest insurers, has announced losses of nearly $1 billion in 2015 and 2016 on the exchanges. The outlook is so bad that UnitedHealth and other insurers are even considering leaving the exchanges altogether next year, which may result in millions of canceled plans.”

The Nevada Health Co-op has already closed shop with little chance of it ever repaying its $66 billion federal start-up loan, since it lost $42 million in its last year and a half of existence.

Nascimento concludes that higher premiums and higher deductibles are making health insurance too expensive for many people to use. 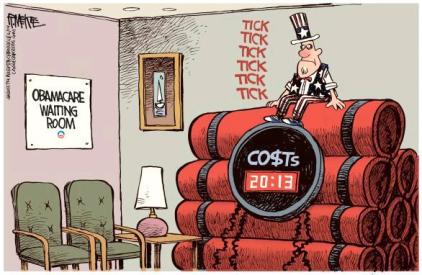