Another effort in Washington this past week to rein in the executive branch’s power to grab Western land and take it out of productive use was strangled in its crib by Democratic senators.

Utah Sen. Mike Lee tried to amend a Senate energy bill by adding a provision limiting a president’s power under the Antiquities Act of 1906 to create new national monuments without the consent of Congress and the state in which the monument is located. His amendment failed on a near-party-line vote.

Nevada Sen. Dean Heller, who voted for the Lee amendment, said, “As we approach the end of the Obama administration, it is even more important we reign in the executive branch’s authority to unilaterally lock up our public lands, so I am disappointed this amendment failed. Often large monument designations that do not have public support get pushed through as presidents leave the White House. Heavy-handed executive action is not the best way to preserve some of the West’s most treasured places.”

The Salt Lake Tribune quoted Sen. Lee as saying, “The president of the United States has no business seizing vast stretches of public land to be micromanaged — and mismanaged — by federal agencies, especially if the people who live, work and depend on the land stand in opposition to such a takeover.”

This past summer the president — at the behest of Sen. Harry Reid — signed a proclamation creating a 700,000-acre Basin and Range National Monument in Coal and Garden valleys in Lincoln and Nye counties, even though most of the state’s congressional delegation and local elected officials opposed it.

A year ago Reid took to the senate floor and chastised those who sought to give states a greater say over Antiquities Act land grabs, noting that in 1922 President Warren Harding used the Antiquities Act to protect the Lehman Caves.

“Some members of Congress – frankly, a minority – believe we should repeal or gut this law,” Reid said. “They advocate weakening a presidential authority that protected the Grand Canyon and even the Statue of Liberty. … I will absolutely do everything I can to protect the Antiquities Act that has been in existence since 1906 and has been utilized by 16 presidents.”

In a telephone conference call with constituents recently, 4th Congressional District Rep. Cresent Hardy, whose district covers northern Clark County and the southern half of rural Nevada, said of the efforts in the Senate, “Well, I think I’ve been pretty vocal on the Antiquities Act. The Antiquities Act was set into place to protect the minimal footprint of that which you are trying to protect.”

He noted that one of the reasons Reid pushed for designating the Basin and Range National Monument was to provide a buffer for a mammoth earthen “art” project called “City” near Hiko and petroglyphs in the area. He estimated those could be protected with less than 150 acres.

He described the area as no different than any other tract of land in the whole state of Nevada.

Hardy added that he did manage to get approval to allow continued use of the monument area for Air Force training, which has a $5.2 billion impact on the state’s economy.

“The Antiquities Act I think is dilapidated, it’s worn out, it needs to be revisited and have more controls, instead of every president trying to create themselves a legacy,” the congressman said.

Some have argued that the Antiquities Act was an unconstitutional abrogation of Congress’ duties. Article IV, Section 3 of the U.S. Constitution reads: “The Congress shall have Power to dispose of and make all needful Rules and Regulations respecting the Territory or other Property belonging to the United States …”

A Heritage Foundation essay argues, “The delegated powers are defined as placed in distinct branches of government for the ‘accumulation of all powers, legislative, executive, and judiciary, in the same hands,’ writes James Madison in Federalist No. 47, ‘may justly be pronounced the very definition of tyranny.’ While the executive must exercise some discretion in the application of law, lawmaking remains the prerogative of Congress.”

The Supreme Court has upheld the act three times, but on arguments other than constitutionality.

A version of this column appears this week in many of the Battle Born Media newspapers — The Ely Times, the Mesquite Local News, the Mineral County Independent-News, the Eureka Sentinel, the Lincoln County Record and the Sparks Tribune — and the Elko Daily Free Press. 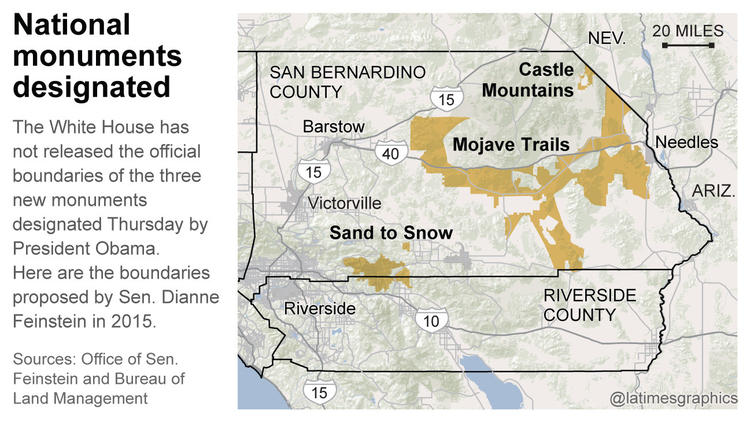 On Thursday, President Obama designated the Mojave Trails, Sand to Snow and Castle Mountains monuments under the 1906 Antiquities Act.

The lede on the LA Times account reads: “President Obama designated three new national monuments in the California desert Thursday, expanding federal protection to 1.8 million acres of landscapes that have retained their natural beauty despite decades of heavy mining, cattle ranching and off-roading.”

So, what do they need to be protected from if they’ve retained their natural beauty after all that?

The LA paper quoted one self-styled environmentalist as saying: “A few centuries ago, Mexican wolves chased pronghorn antelope across this very landscape. … We’re already in discussions with federal wildlife authorities, about taking the next step: reintroducing species of a bygone era, starting with pronghorn antelope.”

An earlier story in the Las Vegas newspaper quoted a spokesman for the California Fish and Wildlife Department as saying there is “no evidence pronghorn ever occupied the Castle Mountains area” and there is no interest in trying to introduce them.