On this day in 1949 “Nineteen Eighty-Four” was published.

It added to the lexicon: Big Brother, thoughtcrime, newspeak, doublethink, Room 101, as well as the painted slogans WAR IS PEACE, FREEDOM IS SLAVERY, and IGNORANCE IS STRENGTH.

Today our ignorance is indeed strength for politicians who get away with telling us debt is wealth and “green” will save us all from a warming planet. 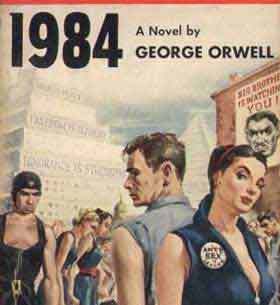 In fact the president recently told us we are not at war with Muslim jihadist, we are at peace.

“Nobody is listening to your telephone calls,” Obama reassured us Friday. “We have to make choices as a society … It’s important to recognize that you can’t have 100 percent security and also then have 100 percent privacy and zero inconvenience.”

He went on to say: “If people can’t trust not only the executive branch but also don’t trust Congress and don’t trust federal judges to make sure that we’re abiding by the Constitution, due process and rule of law, then we’re going to have some problems here.”

Trust the executive branch in which the IRS targets tea partiers? Trust the Congress, which passes bills no one has read or understands? Trust the judiciary where something is a fine one day and a tax the next and it is OK to gather the DNA of people who have not been convicted of anything?

The Constitution was written expressly because the Founders did not trust government, and the Bill of Rights was added to even further tie its hands, such as the Fourth Amendment:

“The right of the people to be secure in their persons, houses, papers, and effects, against unreasonable searches and seizures, shall not be violated, and no warrants shall issue, but upon probable cause, supported by oath or affirmation, and particularly describing the place to be searched, and the persons or things to be seized.”

As I pointed out some time ago, our one-worlder president doesn’t believe in fighting a global war against man-caused disasters. His Defense Department (They don’t call it the War Department anymore.) sent out a memo saying: “this administration prefers to avoid using the term ‘Long War’ or ‘Global War on Terror’ [GWOT.] Please use ‘Overseas Contingency Operation.’” And a man standing on a table, firing a gun, shouting Allahu Akbar is merely workplace violence.

“Don’t you see that the whole aim of Newspeak is to narrow the range of thought?” Orwell wrote in “Nineteen Eighty-Four.” “In the end we shall make thoughtcrime literally impossible, because there will be no words in which to express it.”

The last words of the book: “He had won the victory over himself. He loved Big Brother.”

46 comments on “Orwell as prophet: ‘If you want a picture of the future, imagine a boot stamping on a human face — forever’”