While the U.S. Supreme is pondering two court cases that might make anything the Nevada Legislature does on the topic of gay marriage moot, nonetheless our lawmakers are plunging ahead in an attempt to overturn the state’s constitutional ban enacted by the voters in 2000 and 2002.

As a born-again libertarian, I care not what people do behind closed doors and don’t think they should be discriminated against for doing so. As a lifelong writer and editor, I have qualms about changing the definition of words. It is a qualm I share with George Orwell who said those who control words control thoughts. 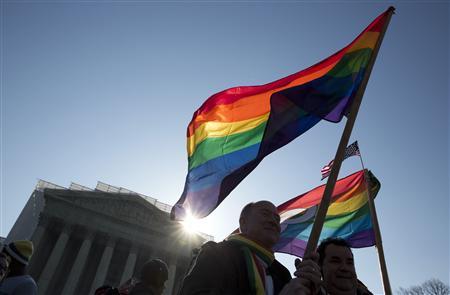 In front of the Supreme Court building. (Reuters photo)

But there is also a certain historical aspect to the discussion of this topic that is largely overlooked. I was reminded of this today by a paragraph in a Las Vegas Review-Journal editorial calling for the repeal of the state’s constitutional ban on gay marriage.

“Yes, we might wish to return to a day when the sacrament of marriage was an entirely religious matter, not regulated by the state,” the editorialist remarked. “In fact, it must be reiterated at every stage that government has no power to require any church or religious organization to recognize, endorse, or financially support same-sex marriage, or anything else abhorrent to its teachings.”

But if the Catholic Church’s ancillary institutions may not “discriminate” by refusing to provide free contraceptives to all insured employees, how long before …?

Now the history lesson:  In 1882, the Edmunds Act outlawed polygamy. Any Mormon who continued to practice polygamy was stripped of the right to vote or hold public office. As many as 1,300 were jailed.

At least polygamy had a long history of acceptance, one of Biblical proportions.

Might churches that “discriminate” against the civil rights of homosexuals to marry have their tax exemptions denied and building permits rejected?