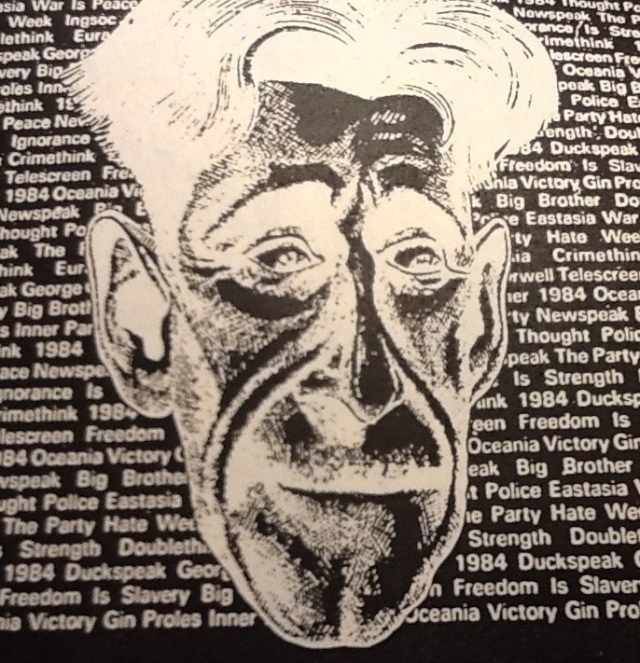 In the waning days of 1983 while working as the city editor of the Shreveport Journal I penned one of those tried-and-true mainstays of the journalistic craft — a soft feature tied to the anniversary of some event. In this case, it was the republication on the 35th anniversary of the original publication of George Orwell’s classic dystopian novel “1984.”

I thought I would wipe 30 years of dust off and see how the book and the feature hold up to the mirror of time. It ran as doubletruck, newspaperese for the facing pages in the center of a section. The headline was: “Big Brother is watching you.” It included interviews with professors and politicians.

Here is the first excerpt in what may become an occasional series on this blog. Parenthetical comments are from 2013:

When the new calendars go up on the wall Sunday, they will read 1984. How close will the year resemble the dark vision of a tubercular writer who spent his dying days on a Scottish island 35 years ago writing a modern classic — “1984”?

Orwell’s book is an excursion into an anti-utopia where reality is a moving target: On Monday Big Brother reduces the chocolate ration to 20 grams a week and on Tuesday there are demonstrations in the streets, people thanking Big Brother for raising the chocolate ration to 20 grams. (Sort of like Obama on the sequester. Nov. 21, 2011: “I will veto any effort to get rid of those automatic cuts to domestic and defense spending.” Feb. 19, 2013: “Now, for two years, I’ve offered a balanced approach to deficit reduction that would prevent these harmful cuts.”)

The setting is a dilapidated London, now called Airstrip One. Big Brother and the Party rule Oceania, a nation with a vague geography along the shores of the Atlantic Ocean. It is a nation constantly at war with one or both of the other two superpowers. It is a world which smells of boiled cabbage, oily Victory Gin and sour beer. It is a drab world where the color comes from giant posters. “It was one of those pictures,” Orwell wrote, “which are so contrived that the eyes follow you about when you move. BIG BROTHER IS WATCHING YOU, the caption beneath it ran.” (Rather like an infrared equipped drone or huge network of cybersnooping computers. Let’s call it Perfect Citizen. Or as one internal Raytheon email seen by a Wall Street Journal reporter said, “Perfect Citizen is Big Brother.”)

The book made the terms “Newspeak” and “doublethink” a part of the political lexicon. (Like White House spokesmen who refuse to even admit the drone war exists.)

“1984” has outgrown even Orwell’s broad mindscape. The reality of the book, in an Orwellian twist of events, has become a moving target. “1984” has become the bible of anti-socialists, though Orwell himself was a socialist. The image of Big Brother is drawn like a gun to oppose every technical advance, although Orwell was aiming at political and intellectual changes, not science or technology.

Are politicians raping the language? Is tax hike really a revenue enhancement? (Is government spending really an investment?)

Is Big Brother watching? Or just tapping the phone? Or peering down from the security camera on the wall? Or breaking into your computer file?

George Orwell respected language and railed against its abuse. He was particularly offended by the propaganda — some of which he helped to write for the BBC in World War II. He saw firsthand the way the press was tricked and subverted for political purposes in the Spanish Civil War. Battles that never happened. Heroes who became traitors. (Moveon.org ad: “General Petraeus or General Betray Us?”)

One of the major themes of “1984” is the abuse and manipulation of language and information for the purposes of the state. Big Brother dictated: “War is peace. Freedom is slavery. Ignorance is strength.” Orwell dubbed this doublethink, the ability to hold two contradictory attitudes simultaneously. (Blacks overwhelmingly voted for Obama though the unemployment rate for blacks is 13.8 percent and blacks account for 25 percent of workers who have been unemployed for longer than 99 weeks, though blacks are only 12 percent of the labor force.)

To Orwell the world of politics was a “sort of subatomic or non-Euclidean world” in which two and two may equal five. (Where a slowdown in the increase in spending is a savage budget cut.)

Few Orwell-watchers can resist calling up Reagan’s changing the name of the MX missile to Peacekeeper. (And a pre-planned, organized, RPG- and mortar-armed terrorist attack on a consulate in Benghazi was really just a spontaneous protest against an anti-Islamist movie.)

Dr. Joseph Koshansky, an assistant professor of history and political science in his fifth year at Centenary (College), is one of those who can’t resist.

Koshansky said one of Orwell’s warnings is that if one leaves the definition of words to a group or the state, then the group or state will define thoughts and actions.

Of “1984” Koshansky said, “I think this book, a lot times, people will say, ‘Oh yeah, I know about this book, we can use this book to talk about the Soviet Union.’”

But Koshansky said “1984” can be used to talk about any government, whether it is democratic, pluralistic, monarchial, parliamentary or totalitarian.

Orwell, Koshansky says, was warning us of what could happen, that the use of a word or name for something it is not eventually will be accepted and believed. “We forget that they (words) are tentative, creative, ephemeral and sometimes fictional accounts of what’s going on.”

When the president says the MX missile is a Peacekeeper, Koshansky said, he wants us to accept that definition as truth, as reality.

To be continued … maybe.